The wettest January ever

British people often complain about the weather. Now, finally, we really do have something to moan about. Last month was the wettest January ever - well since records began - which is a pretty long time! Thousands of people have been flooded out of their homes and we have lost our train line to Plymouth: 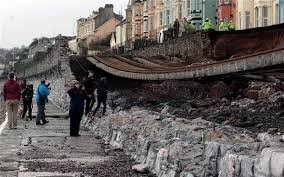 Now the 'blame game' is underway. That means that everybody is blaming everybody else for the floods. You can't stop the rain but you can do things to reduce the likelihood of floods occurring, such as cleaning the mud out of the rivers. This is known as dredging - probably another new word for you - and useful if you are an environmental science or engineering student. People in the government are blaming people in the Environment Agency for not dredging the rivers, and people in the Environment Agency are blaming the government for restricting their budget. No surprises there!

I've been marking a lot of student written work and I've noticed that they make a lot of mistakes using the passive voice. If you look at the photograph above, the best way to describe the situation is to use sentences in the passive voice:

The wall has been washed away.

The train line has been damaged.

There's quite a lot to think about in these sentences and the passive can get quite difficult when you have to put it into different tenses. I will be telling my students to take a look at the passive exercises at Monash University on their Language and Learning Online pages which you can find here.