It’s official: the summer has been awful. It’s usual in the UK to talk about the weather but there’s even more of it about this year because of the poor summer. Actually, the surprising thing is that we mention it at all – you would think that we would have got used to our terrible climate by now! But I read an article saying that this summer was the coldest since 1993 and we had 126% of the usual amount of rain, which is quite a lot. I saw a very English thing the other day: Morris Dancers dancing in the rain. If you haven’t ever seen Morris Dancers then you need to visit some village fairs in the summer where you might be (un)fortunate enough to see middle-aged men dancing around in circles wearing bells and flowers: 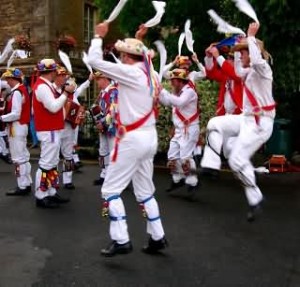 Last post I mentioned the website ‘Student Stories’. I have been listening to a Polish student talking about her experience of studying in the UK from the site and I am recommending her story because it is fascinating how she talks about how she began to think in English. It takes time! At first she was getting poor marks as she was struggling to get along. But as she spoke more and more English her marks got better and she began to be able to use English in the way that she heard it and read it. When you are struggling it’s good to hear to stories like this. Listen to Dobrusia’s story here.