Many overseas students I talk to feel quite angry about the high tuition fees that they have to pay in the UK. Most students pay about £8 – 9,000 per year for their fees, and that is before the cost of accommodation, food, travel, study equipment and everything else. Actually, what makes them angry is that they pay so much more than British students. “It’s not fair! We have to pay more than the British students!” And it’s true! British students pay about £3000 for their fees. But hang on! A few years ago, British students didn’t pay anything for their fees: higher education was fully funded by the government from our taxes, like primary and secondary education! But it’s all changing. Last week we were told that the government is going to allow universities to charge British students up to £9000 a year and I cannot imagine what fees for overseas students will be. This is a huge change in British higher education. The cost of university education is being moved from the government to the student and that will mean even higher fees than ever before for overseas students. If you’re thinking of studying in the UK then do it quickly before it gets more expensive!

If you are in the UK why not let the government know that you think the cuts in higher education are a bad thing? On Wednesday the National Union of Students will be demonstrating (yes, walking in the street to show your disagreement) in London. The villain (the bad guy!) of the hour is our Liberal Democrat Deputy Prime Minister Nick Clegg who publicly promised NOT TO RAISE TUITION FEES before the general election and is now RAISING TUITION FEES! Boo! (That’s him on the right with a sign with his promise. 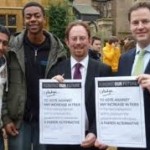 Read about the NUS demo here.

Talking about raising tuition fees, I am always seeing students getting mixed up with the difference between the words rise and raise.

The sun rises in the east.

The government is raising tuition fees.

So, who knows the difference?